New Song “Whatever Fits Together” Out Now

Singer songwriter Helen Ballentine – who records as Skullcrusher – has released the first track from her eagerly anticipated debut album Quiet the Room (to be released October 14 on Secretly Canadian). The track, “Whatever Fits Together” finds a retrospective Ballentine – pondering her desires with her signature plaintive vocals laid over folky guitar. The release is Skullcrusher’s first new music since her lauded Storm In Summer  EP was released in April 2021. Skullcrusher kicks off a run of North American shows at Newport Folk Festival on July 23rd and the newly added fall dates include stops in New York City, Chicago, Toronto, San Francisco and Seattle. General onsale begins July 22 at 10am local, get tickets at Skullcrusher online.

In describing the song’s impetus, Ballentine says, “I wrote “Whatever Fits Together” while reflecting on my past and wondering how I might begin to explain it to someone. I viewed my younger self through a wash of emotions: anger, sadness, pity, confusion, all reaching for a kind of compassion. I tried to capture the contradictions that comprise my past and define who I am now. As I looked back, I saw my life in pieces: some moments blacked out, some extremely vivid, some leading nowhere. Through the song I attempt to piece it together in some non-linear form and accept my disparate story.”

“Whatever Fits Together” comes accompanied by a beguiling video, for which creative director Silken Weinberg says, “The video for “Whatever Fits Together” is a nightmare of phantasmagoria, taking inspiration from The Cabinet of Dr. Caligari and one of my favorite silent films, Shoes.  We felt this song needed a darker atmosphere in order to shed light on its essential message: to address the monsters that exist in the shadows.  Aiming to keep it simple, we created a black void and Angela Ricciardi filmed on black and white super 8.  In the end, it became a series of confrontations.”

Watch the video for “Whatever Fits Together”

The framework for Quiet the Room was laid two years ago, when Ballentine wrote and recorded a song of the same name. Unlike most other Skullcrusher songs, it was written on piano, her childhood instrument.  While writing the rest of the album in the summer of 2021, visions of Ballentine’s youth flocked like bats from the attic as she wandered her Los Angeles apartment in the sticky, sweltering heat. The image of a house emerged as she merged the interior world of her songs with the exterior rooms that contained her. She was thinking of her childhood in Mount Vernon, NY, which she calls the biggest inspiration for the record.

“It’s like layers of tracing paper, like someone is trying to make a drawing and you’re seeing the entire process,” Ballentine says of the album’s construction. Looking back through home videos, she became struck by seemingly benign shots captured through the window—her at the piano or walking in the yard. There was a weight that extended beyond the edges of the frame, a darkness hovering just out of view: her parents were fighting, on the road to divorce. The house was failing to contain them all. What she set out to capture on Quiet the Room was not the innocence of childhood, as it is so often portrayed, but the intense complexity of it. The result is a stunning and quietly moving work that reflects the journeys we take through the physical and spiritual realms of ourselves in order to show up for the world. 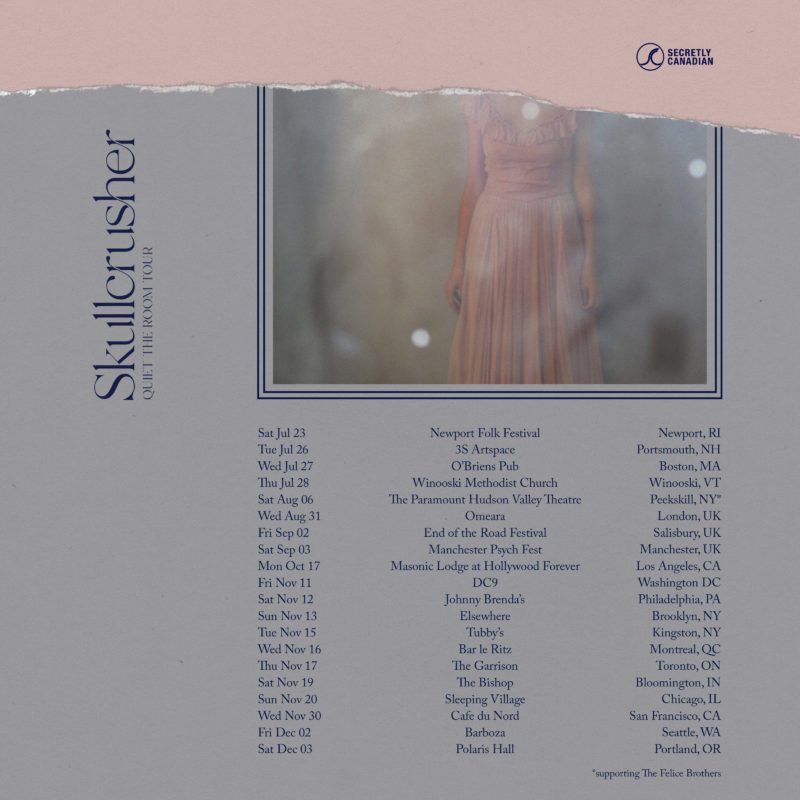 Skullcrusher – Whatever Fits Together

Wet – Turn The Lights Down Low

Turn The Lights Down Low

NNAMDï – I Don’t Wanna Be Famous

I Don’t Wanna Be Famous